Leaving your fathers house for the first time is one hell of task.

Few things are as stressful as having a parent push their expectations on a their child. More so if that parent happens to be the God of the underworld. In this action rogue-lite, players takes control of Zagreus, the son of the god of death himself, Hades. After learning of his mother leaving the House of Hades, Zagreus prepares for his own departure out of his father’s domain. This review will be as spoiler free as I possibly can make it. Without further ado let’s dive into, or rather, climb our way out of Hades.

Have you ever played Slay the Spire? Binding of Isaac? These two games are absolute bangers! (Can I say bangers in a review? Eh, why not it’s my review right?) Both of these titles fit perfectly into the genre that is the rogue-lite. However, while these titles have a story (Binding of Isaac has a surprising amount of lore if you dig hard enough) they aren’t exactly story driven. This is where Hades breaks away from a typical game of similar make. The story is, for me at least, a quarter, if not half the reason I was driven to keep playing. There are other amazing aspects that will get to shortly, but it should be noted that the story in Hades is very compelling. By the time I finish with the main story, yes, I did say main story in a rogue-lite, I was fully invested with pretty much every character I came across. The story is driven by the conversations Zagreus has with the denizens both in, and outside of the aptly named, House of Hades. Each win brings the player that much closer to uncovering the mystery of why the Prince of the Underworld’s mother left and where. As the game progresses each person you talk to has their own mini story inside the main one. I was always excited to chat up with all my friends in the House regardless of whether I won or lost my run because more times than not, they had something new to say to me. It really helps to push that, “Just one more run!” mentality. Story Score: 8/10

If you’re expecting a hack n’ slash romp through the different levels of the underworld then you’ve only come for half the party!

Y’all… (Can I call y’all y’all?) I’m one of those gamers that fully believes that the score of a game can make or break it. I come to think of Dragon Quest XI: Echoes of an Elusive Age, the original release’s music was fairly lackluster. After hearing the phenomenally orchestrated score of the DQ8, I was really put off by the music in DQXI, which in turn put me off the game a bit. After they released the game for switch and pc, a fully orchestrated version of the soundtrack came with it. Now I know you might be asking, what does this have to do with Hades? The sound track for this game could possibly the best part of the entire game. From the ballads of Orpheus, the court musician of the House of Hades, to the hard rock jams while attempting your escape from Underworld, the music is spot on with what’s happening around you. I firmly believe that a good song can add to the tension, drama, comedy, or sadness of a moment, and Darren Korb, the games composer, hits the musical nail right on the head. My personal favorite song isn’t heard until the credits roll, yet another great incentive to keep playing run after run. Music Score: 10/10

Almost all of the hours I put into Hades were on my Nintendo Switch, and having said that I can safely recommend this game to anyone on any console. With the Switch being the console with the least hardware strength (I mean unless your PC isn’t that great but hey, I’m here to judge Hades, not your computer friend) I can confirm that game runs fine even at the busiest of moments in the game. Speaking of busy, this game is no slouch. If you’re expecting a hack n’ slash romp through the different levels of the underworld then you’ve only come for half the party! This game is challenging at the best of times and unforgiven at the worst. Like many of the great rogue-lites that have come before Hades, very few times did I feel like the game was too unforgiving or cheap. Maybe once or twice I shot my hand accusingly at my screen with a remorseful “Come on! What was that!” but 99% of the time I felt like a loss was really just a bad roll of the dice or myself just simply not being “good” enough. As Zagreus makes his way upwards he is aided with gifts from the God’s Above, and a few permanent boons earned from different collectibles. The gameplay is fast, tight, and will make you pay attention to your entire surroundings and not just the quarry in front of you. With a customizable control scheme and several “builds” with weapons and godly gifts to alter your playstyle, it’s rare for two runs to be exactly the same. Gameplay Score: 7.5/10

I would easily slot this indie masterpiece as one of my personal top 10 video games of all time.

Supergiant Games took the subject of Greek Mythology, which I think is a mild interest to a lot people (Is that presumptuous of me? Eh it’s my review.) and turned out one hell of an experience. Hades is one of those titles that reminds me that video games can be more than just pushing buttons for an escape. Like a good novel, I didn’t want to put Hades down because I needed to know more, I needed to read that one more page, play that one more run. Many rogue-lites are designed to give you that “just one more” feeling and Hades is very comfortable in this space. The biggest difference I found between this game and its brothers and sisters of the genre is what else it had to offer aside from an addictive gameplay. Hades has a very interesting and compelling story that it wants to tell, and it delivers such a feat by giving the player an excellent mix of action and narrative. If I were to say one negative thing about this game if would be that I want more! That’s not to say it’s not worth the asking price but I just need more content. I don’t want to leave this world. I want to learn more about the other gods, more about Zagreus. I would easily slot this indie masterpiece as one my personal top 10 video games of all time. (Hmm that smells like a future writing in the making…) 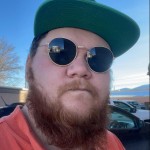 Ahoy! Tis I Robot Pirate Gary! I’m a streamer/reviewer of video games now I guess? I’m a nerd with a passion for gaming both video and table top! You can’t follow me on twitch, twitter, and TikTok @robotpirategary