We’ve listed all of the announcements from DC FanDome so you don’t have to, including trailers and announcements.

Take a look below:

The man in black was finally revealed with a little sneak peak that you can see below. Dwayne ‘The Shock’ Johnson dons the black mantle, in the opening to the movie – set for release July 29th 2022.

Aquaman and the Lost Kingdom

We got our first, behind the scenes look at Jason Mamoa in Aquaman and the Lost Kingdom. Exclusive behind the camera footage and clips featuring some crazy concept art. Film is due for release December 16th 2022.

The much anticipated game from Rocksteady Studios was back with more information, showing off a brand new trailer giving us an even more in depth look at the story and the events set to unfold in the game.

Fresh from his appearance in the latest Suicide Squad movie, John Cena is reprising his role as Peacemaker in the self titled HBO Max production. This time, we got a whole rundown on what we expect to see, including a release date – January 13th 2022.

For the first time, fans got to hear from DC Chief Creative Officer and Publisher Jim Lee, when he showed us the new modern slogan for the Man of Steel. Not only is Superman a symbol of hope and optimism – it’s this optimism that will push him going forwards with this new mission statement:

Truth, Justice and a Better Tomorrow.

So, we expect to see more of these stories, focusing on these elements in the months to come.

Along with familiar faces, we got a look at something brand new. DC is venturing into the world of big screen animation with DC’S League of Super-Pets.

Featuring Krypto and Ace the Bat-Hound for the very first time, we got a look at an exclusive clip starring both of the powerful pups. Full trailer is due to arrive in November, with the actual movie set to release on May 20th, 2022.

We got an announcement that Doom Patrol will return for a fourth season, and we got a look at a very strange mid-season trailer which you can see below. If you haven’t watched Doom Patrol yet, it might be a good time to catch up. With only three episodes left – the season three finale is due on Thursday, November 11th 2022.

The scarlet speedster made an appearance when Ezra Miller arrived to tease fans with a very early look at The Flash. The trailer below may be short, but it’s VERY interesting, showing Barry Allen working alongside another version of himself – with our first glimpse at Keaton’s Batman.

The Sandman TV show has been in the works for a very long time and thanks to WB Television in cooperation with Netflix, it’s finally happening. We were treated to our first look at Game of Thrones alumni Gwendoline Christie as Lucifer Morningstar. 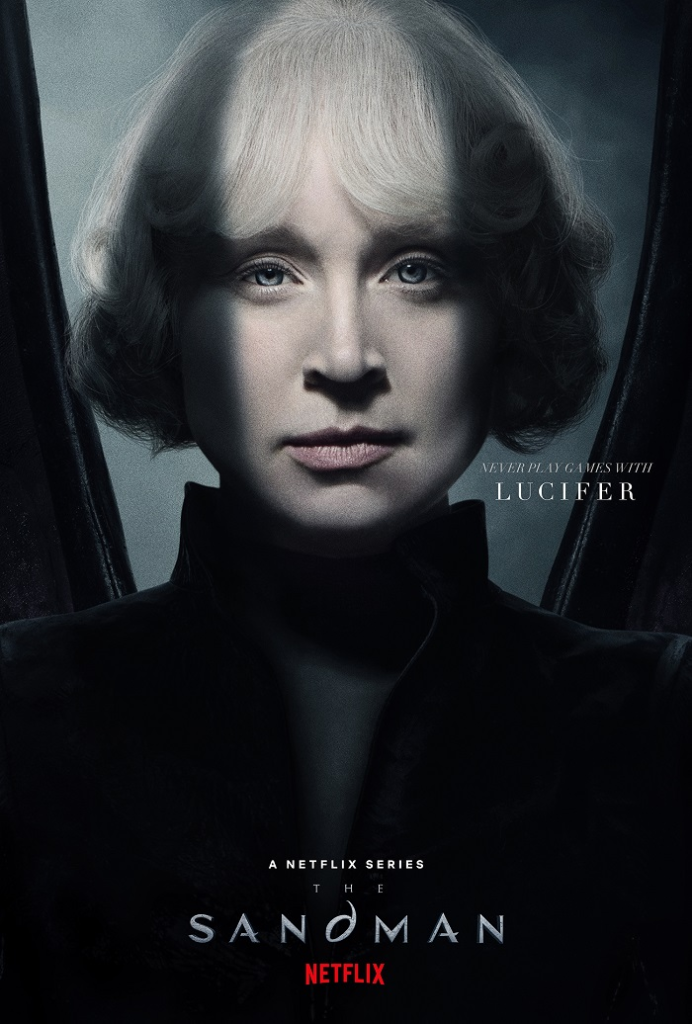 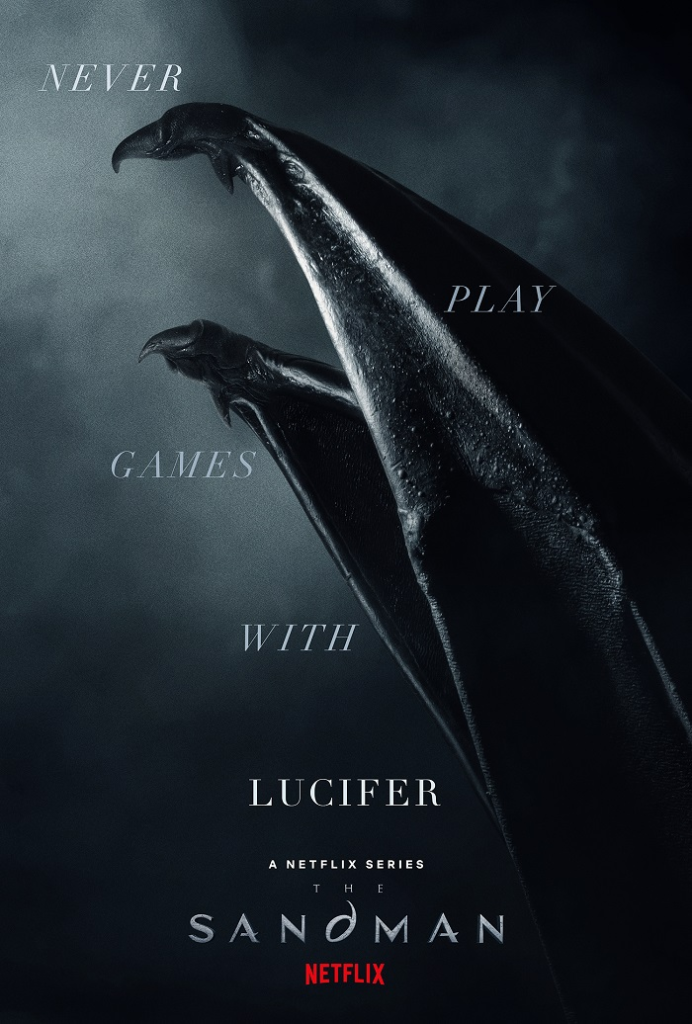 The story that keeps on giving. We got another look at the all new Injustice animated movie, available on digital, 4K and Blu-ray.

Heavily inspired by Batman: Year One, the movie features Smallville’s Justin Hartley as Superman and Star Trek: Discovery’s Anson Mount as Batman with Injustice co-creator Ed Boon as a consultant.

Here is a clip below:

Both surprised and very excited to given a first bit of information about the upcoming Blue Beetle movie from directors, Angel Manuel Solo and Gareth Dunnet-Alcocer and star Xolo Mariduena.

It appears to be a very authentic vision of the Latin American superhero that is humorous and fun, but also heart. We also got our look at the Blue Beetle’s suit with this concept art.

Last time we heard about Gotham Knights was at last years FanDome event, but this time we got a full look at the story, including the game’s big antagonist the Court of Owls.

We got an announcement that Batwoman is returning a third season. Star Javicia Leslie dropped by to share her excitement about what’s coming next, including villains such as Mad Hatter and Poison Ivy. Also… a new friend.

A DC FanDome event wouldn’t be complete without another original animation announcement. This year, we got a look at Catwoman: Hunted, which released on digital, 4K and Blu-ray on February 8th, 2022. You can see the trailer below:

Kicking off it’s seventh season on The CW, DC’s satirical ensemble adventure will soon reach it’s 100th episode and to celebrate the fact, they took us through 100 episodes in 100 seconds. It appears The Flash isn’t the only one capable of time travel.

To the Batman fans out there, this is what you’re going to REALLY care about, so listen in.

Batman: Unburied, is an original narrative podcast executive produced by David S. Goyer and coming next year to Spotify.

Fans actually got to hear the final cast members get announced by Barbara Gordon herself, Gina Rodriguez.

“Gina joins the dramatic and psychologically thrilling take on Caped Crusader, as the daughter of former police commissioner Jim Gordon and star detective for Gotham PD. Throughout the series, Barbara will grapple with her own ethics, as she tries to keep within the lines of police work yet is finding herself drawn to Batman’s self-styled method of justice.

Finally, we got some information about the live action film for Batgirl. Actress Leslie Grace, writer Christina Hodson and directors Adil El Arbi and Bilall Fallah spoke about bringing the character to life in live action for the very first time.

Grace discussed how refreshing it was “to read for a female superhero that has grit, but is very sincere and almost eager to prove herself.”

It was also confirmed that Barbara Gordon will have a full cowl and red hair in the movie, with a new concept image of Batgirl’s suit as well.

Fans asked for it and fans got it. Brenton Thwaites called in all the way from Australia to announce season four of Titans. Along with this, HBO Max gave us a first look at the season three finale ahead of it’s scheduled air date this Thursday, October 21st.

Everyone at the animation studio is hard at work on season three, but that didn’t stop Harley Quinn and King Shark from dropping in to show us a peak at the new season.

We got our first look at Batman: Caped Crusader from Matt Reeves, J.J. Abrams, Bruce Timm, and James Tucker.

The upcoming all-new animated series and reimagining of the Batman mythos. Born out of a noir sensibility, in a timeless world that dates back to something like the 1940’s, utilizing state-of-the-art animation techniques, we will experience Batman like we’ve never seen him before.

We got served a double dose of Justice when we got to see the premier of Young Justice: Phantoms alongside the unexpected news that the first two episodes of the season are NOW streaming on HBO Max.

Shazam! Fury of the Gods

We got a behind the scenes look with Asher Angel and Zachery Levi to show fans what they can expect to see in the next movie. Bigger action, more exotic sets, crazy characters and a plot deeply set in mythology – rounded by a pair of powerful new villains played by Helen Mirren and Lucy Liu.

Ending this years FanDome date, we got a whole new look at Robert Pattinson’s The Batman. Scheduled for release on March 4th, 2022. Without saying anything more, you can see the trailer below.

And that’s everything! Let us know in the comments what you’re most excited for and while you’re down there – don’t forget to check out all the other latest news such as the recent news about Sony’s latest acquisition.

My name is Liam or “Hok” for short and I am a hobbyist streamer on Twitch.tv. Could be described as a soft drink connoisseur, an anime specialist, a purchaser of many video games. Father of two. Sci fi and film fanatic. Lover of LCFC 🦊 and the footballs ⚽